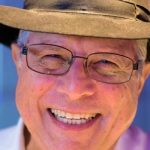 WHY DO WE NEED TO know? We are living in a mystery.

Every morning for more than eight years, my routine has become one of connection with that unseen, inaudible and intangible force that lies within us. I go into silence, then I meditate in my own peculiar manner. In those early moments

before the presence of the light of day is felt, I have my greatest experiences before I join the rest of the world in its daily trek. These occurrences tie me to that unexplainable space where inspiration takes over, and without knowing I start writing without realizing that my mind and hands are used as a vehicle by the un-nameable inner force that makes us ALL so powerful and great.

Thus, I lose myself in this sanctuary of eternity and the words flow unimpeded by personal agendas. My breathing takes over my body and I just bask in this nameless presence that can never be properly described through words alone. This an example of what flows through my being and appears in my pages of paper:

Though there are people, religions and organizations that might profess to know the solutions to every natural manifestation in the Universe, through either a scientific, mathematical or even metaphysical manner; there is still the final minuscule link that has never been able to be connected to, the absolute source of all that is.

There might be fairly logical explanations backed by tradition, faith or even complex equations, but this just takes us so far, never to the finish line. For there seems to be no beginning nor end to this ageless questioning of who we are, where do we come from, why are we here and where will we be going after that inescapable experience called death.

In the meantime, many people never even care about any of this because they go through life just seeing life as a constant series of events that are comprised of their childhood, adult life, and if lucky old age. Within that linear way of looking at their lives, they just experience the physical revelations of what they can see, feel, touch, taste and hear; while only wanting the ephemeral rewards provided by the slew of material things they accrue within this life plane. By doing so, they are led to believe in what others believe either by proxy, by tradition, the media, the

internet or just peer pressure. They are convinced that all those material things bring them happiness. Things like cars, fancy cars, houses, bigger houses, success, bigger successes, tangible goals bigger and bigger goals, always something material that is replaced immediately, once the luster of its acquisition has been lost, by some other shiny object. There is always something else immediately that follows and becomes the next acquisition that they must have to be happy.

Then there are others who actually start to understand that there is more to life than the material things that we gather while we are alive. These people find solace in relying on religion to provide the string that ties them to something beyond the material, and identifies them with the creator and final judge of all our actions while alive. That SOMEONE will either reward us with eternal salvation or eternal condemnation in the worst fires of a place that in name alone brings the most outrageous fear to manifest in everyone who believes in its existence, and even to most who don’t, just by the mention of its name, “Hell”.

Fear is the absence of love and it’s man’s worst enemy.

Most, if not almost all, people don’t wake up in the morning thinking of

ways to hurt us. We have to stop the madness of believing that we have to live in fear. Almost everything that we might be thinking will happen to us, that is bad, will never occur beyond our mind. There is no present danger that we can’t handle, without the need to be overwhelmed by those that are only interested in controlling us. It is your choice to live in fear or not to live in fear.

Politics and religion spearhead divisiveness through fear, camouflaged by the belief that everything is done for our good and the good of the masses, since we are not smart enough to make our own decisions.

Fear restrains people from having the courage to express what they really believe in. Fear holds back the ability to be who you really are or want to be. Fear in most cases creates anonymity, for the fear to be rejected, exposed or simply make you afraid to say what you want to say, (with your name next to it) because it can bring repercussions with the long tentacles of moral, civil or criminal prosecution and eventually even capital punishment.

Yes, capital punishment still exists in some countries where this is

still entertained as the solution to protect the conventional wisdom that prevailed during a specific time in history, or worse still, today. Thus since the beginning of mankind gathering into communities, cities, countries and nations, fear has reigned and provided control over the masses by religious zealots, nobility, or any other forms of governments that have used fear to stay in power.

But fear has also brought about change, for it too has inspired those human beings that refused to live in fear to rebel. Yes, rebels have always been considered dangerous at the beginning of any type of revolution or movement that has turned the table against those that were using fear as the tool to force all others to quietly stay under their control. For it also has been fear that has caused those in power to react against the rebels that refused to accept fear to prevail – even willing to give their lives in order not to live in fear and pave the road for others to have the choice of not having to live in fear.

Nowadays because of the existence of the quick movement of information on a worldwide basis through the Internet, fear is being cornered and exposed for what it really is: a BULLY; an illusion. Finally, the dissemination of information, in a multimedia manner, has lifted that curse of ignorance that for thousands of years has kept the many ruled by the few through the use of fear.

become true rebels, to stop fearing fear, to convert fear into love, compassion, trust, and to share those beliefs with others; for by doing this we attain the freedom to live our own lives to the fullest, while allowing others to do the same.

Today, I want you to celebrate conquering fear, releasing all those fearful

thoughts that keep you from being you. Unfortunately, there are many other people that don’t have the ability to celebrate this freedom to choose courage instead of fear, and that still live in fear, just like it is also very unfortunate that because of fear we have not been able, as citizens of the WORLD, to conquer the FEAR of eliminating all the barriers that separate us and permit us to eliminate that fear of one day celebrating the FREEDOM FROM FEAR IN THE WHOLE WORLD!

Finally, there is a very small group of people that have not only conquered fear, but that have also finally figured out that neither apparent happiness achieved through material gain; nor even the controlled acceptance of a deity that one day will decide where we will end for eternity after we die; can give us the serenity and peace of mind that most of this group have come to believe, not on their own, but mostly by proxy. Yes, they were born into that way of thinking and were bound by the tradition of a millennia of years lived by the generations that came before them. And lastly we arrive at the final group, the group of people

that just throw up their arms in the air, that totally give up trying to understand anything and everything, and finally succumb to trusting in that mystery that once in a while we get to participate in its revelation, and feel as though we have for an instant become the mystery and “we know that we know”.

We are here to be here in what has been defined as the NOW, there is only one NOW and it never started and it will never end. Just be you, and let others be who they are, and everything will fall in place as we just keep going on through this never ending journey.

You are a Powerful Spiritual Being whether you realize or not and it doesn’t matter either way.  Just BE!

Join Here!  Use the Referral Code  Julio Varela To Get The Special Bonus

Join Here!  Use the Referral Code  Julio Varela To Get The Special Bonus

Julio Varela
(known as “papijulio” to family and friends all over the world) was born and raised in Puerto Rico where he graduated (BA) from the University of Puerto Rico in 1969. For more than 45 years he has worked in International Sales, Marketing, and Operations. His experience with start-ups and helping established companies—mostly with Direct Sales challenges—has given him experience as a consultant, corporate officer, and as an Independent Distributor.He believes his mission is “to bring harmony and balance to those involved in network marketing.” Acting on that mission, Julio has provided products & services to markets in North America, Latin America, and the Caribbean while creating high-level contacts throughout Latin America, Europe, and Asia.
Latest posts by Julio Varela (see all)
No rating results yet