Looking for Leaders… in All the Places by Richard Brooke Leaders make everything happen in our business. They do not individually produce the most volume but they bring with them dozens – even hundreds – of followers that in aggregate do produce the volume.

Look at what you produce each month individually compared to your total volume. You are a leader and a very valuable piece of your upline’s business. Your strategy in building an empire must always focus on attracting, causing to rise up out of the masses and holding on to leaders. To do this you, yourself, must be a powerful and attractive leader. Leaders are not attracted to sort of committed, usually in action, only on fire when I sponsor someone almost leaders. They are attracted to leaders who demonstrate their commitment, their actions and their fire regardless of the circumstances or obstacles. WHERE DO YOU FIND LEADERS? Not in all the right places. In all the places. Leaders are everywhere. Where were you? Were you poised to leap into the business as you laid in waiting on the MLM Leaders website? Doubtful. You were probably doing something unrelated, doing it well and just being a leader.

Leaders are everywhere. It is not so much where to find them as how to flush them out of people you sponsor along the way.

If you have sponsored 20 to 30 people you have probably sponsored 2 to 3 great leaders already. You may not have flushed them out. They may not have been inspired to lead in your opportunity. They may never have seen a really good reason to lead or may not have seen you as the “wind beneath their wings.” The first place you get leaders is to get a group of distributors from which to flush out your leaders. Get the 20 to 30 and as you enroll them treat each one as though they are your next great leader. See them as so. Speak to them as so. Make requests of them as so. Give them responsibilities as so. Have expectations of them as so.

Leaders will look at you and they will respond to how you look at them. Act well your part…

ACID TESTS Often times a person will look like a leader, talk like a leader and even be a leader in other domains. That does not mean they will be your leader. You can determine the readiness of a potential leader by giving them challenges. For example, if you want them to develop a list of potential partners ask them to brainstorm 50 names, cities and occupations and get it to you within 24 hours. Or ask them to get you a couple of appointments to show the opportunity to within 48 hours. If they do you have someone with whom you should work. You have someone who is responding to your leadership. You have someone who is leading by their own example. You have a leader in action. Keep challenging them. INSPIRATION Leaders want to (they don’t necessarily need to) be part of a vibrant, exciting team. They want to make a difference. They want to compete. They want to be recognized. They want to set new standards. As their leader you will want to set the game and challenge them to win…not necessarily beat everyone else, but just win. You want to inspire them to do something that will have them be inspired by themselves and by their people.

Give your leaders targets and show them the rewards both tangible and intangible for achieving them. Keep the game on the forefront of their minds and hearts. Keep them playing even if they falter.

Make sure part of the game is their game. What are their values? What turns their crank? What do they want to accomplish for themselves and their loved ones? Your job as their leader is to keep these inspiring notes singing to them. You can do this by teaching them to motivate themselves by learning the Art of Vision and Self-Motivation…something they will tend to do naturally but will now be able to do as an art for themselves and others. GET OUT OF THE WAY At the opportune time, you will want to get out of the way. Sometimes this is right away. Sometimes it is much later. Usually you will not go wrong getting out of the way earlier than later. Every leader must also be a follower. And every leader will ratchet up their own leadership as soon as they can minimize their own following and cut their own path. You will want to be sensitive to how your leadership may be holding people back. Not that you aren’t a contribution but your leaders will grow mightily by you letting them fly.

Getting out of the way just looks like letting them fail and succeed without you being there to take credit or save the day.

Make your focus this year on you being the most on-fire, attractive, in-action leader you can imagine and attracting someone like you front line. You will find your business leap forward. You will have a lot more fun and most importantly your outlook (vision) for your future will crystallize to make such progress the norm. 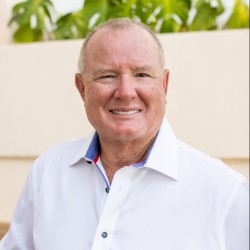 Richard is the author of the best-selling books The Four Year Career & Mach2 With Your Hair On Fire.And, he is an Ontological coach and speaker.