Remember, Success Is A Choice – What are you going to choose?  I was inspired to write this article a few days ago after receiving a call from a young couple named Jason and Audrey who were in search of the “Right Opportunity.” As I sit here writing this article, I don’t know whether they will be joining our team or one of the other GREAT Leaders that I told them they should interview with while doing their due-diligence. I’m certain that within the next few weeks Jason and Audrey will be joining someone’s team and hopefully it will be ours. Yes, you read that correctly… I told them they should actually interview with other leaders before they decided to jump back into the network marketing industry for their third time.  NULL As you might imagine as a result of being one of the 52 contributing authors of the book, “It’s Time… for Network Marketing”, hosting my own radio show (ACES Radio Live) on the subject of “The Home Based Business Industry”, and now one of the authors with “The Network Marketing Magazine” I have people contacting me weekly and sometimes daily asking me to join them in marketing their Company, Product and/or Service. While I’m humbled and honored by all of the calls that I receive, please understand that almost every good leader I know receives the same type of calls every week. After conversing with Jason and Audrey and listening to them both very carefully for over half an hour I had discovered what they were excited about, what they were worried about and what they hoped to accomplish by starting their own home based business. I invited them to watch a video about our company, product, opportunity, endorsements and the timing. I then offered to send them a free magazine, DVD and sample of our product. Through the course of our conversation I had prequalified them as a good fit for our team and people that I would be willing to invest my time with to ensure their success. As we were wrapping up our conversation, Audrey asked me if there was anyone else with any other companies that I would be willing to recommend for them to interview with. I gladly referred them to a hand full of leaders and mentors that I respect and admire… because of who they are as people at the core level… and also based on the types of companies that Jason and Audrey were interested in looking at. First of all “KUDOS” to Jason and Audrey, for taking the time to do their due-diligence prior to joining just any company, product or service and for having the intestinal fortitude to ask me for some referrals of leaders that I respect enough for them to interview with. I know that whoever they choose to team up with that they will be well taken care of.

If you’re not shopping for the “Right Sponsor,” as well as the “Right Company” it’s unlikely you will enjoy the level of success that you’re looking for, especially if you truly want to become a “Full Time Professional Network Marketer” with the income and lifestyle that goes along with that title. You might be asking yourself… Why is it so important to have the “Right Sponsor” and / or “Upline Support Team?” That’s simple… Because the two most important questions anyone should ever be asking themselves before choosing to join any company, product or service in the Network Marketing industry are:

The reason that I believe it’s so important to choose the “Right Sponsor” is because I believe that the Network Marketing Industry is actually an industry of “Relationships” and the real name of the industry should be “Relationship Marketing.”

The truth is… in most cases, when you find the “Right Sponsor;” you will also have found the right company, product or service to partner with. In my humble opinion, one of the main reasons why some people’s first experience with network marketing is a disappointment, is because their first company or opportunity “finds” them. They never get personally plugged into the right mentor or leader within that company who can help them to achieve their goals and make their dreams come true. Most people never take the time to interview with more than one or two people before they dive in excitement first, wallet second and brain last into an opportunity… only to find out after the fact that they made a mistake because there was no one there to help and support them to build their business.

The profound truth of this fact is because most people buy on emotion and then justify their decision with logic and reason after the fact!

If you pause and ask yourself the two questions above, I can promise you with a relatively high degree of certainty that… the time you invest in performing your due-diligence to find the “Right Sponsor” for YOU, will not only save you money, but also a TON of time and frustration in the long run as you build your business. Furthermore, I believe that having the “Right Mentor” can almost guarantee your success!!! My friend Brian Matthews likes to say: most people’s first company and/or experience in the network marketing industry “finds” them. They stumble into it in perhaps a friend’s, relative’s or co-worker’s kitchen or living room where this friend, relative or co-worker shared their excitement about a product, service or company with them. The potential new distributor was impressed enough by what they saw – it appealed to them. In other words, the new person was “found” by the company, product or service they wound up representing; the new person was not actually “looking” for it. And if this newly-found distributor sponsors someone, it’s most often by accident, not by design.

You see, without the support of an experienced sponsor and team that uses a proven system, it will be hit-and-miss… not the predictable, sustainable, ever-increasing incomes they would desire.

The truth be told, in many cases, they joined as a distributor only to help a friend, or perhaps to get the best price available on the product or service, but NOT with an experienced partner, team and plan. Unfortunately, this is the reason why so many distributors never make any “real” money in their first venture in network marketing. The truth is, many new distributors who sponsor with well-meaning but inexperienced people or those who do not have the success of their team members foremost in their hearts, minds, and actions never earn a bonus check at all. It’s because a huge percentage of the distributors with most companies are simply wholesale buyers of the products and/or services, and do not actively or systematically build a business at all. Most of them only became a distributor in order to be able to get the product or service at the wholesale or distributor price. Some of these people will at some point actually share the opportunity with a handful of their friends and family members within their circle of influence… but if they do not get a positive response a few times, many begin to realize that it is called “Net-WORK” Marketing (and not “Net-LOAF” Marketing!) for a reason; it does take effort and time to build a business, and sponsoring with a caring, experienced professional who will mentor you to success will shortcut that process for you.

Unfortunately, many people, if they feel “rejected” when someone whose opinion mat
tered to them didn’t join their team, that’s when they make a conscious decision to settle for the life they have and remain as wholesale customers while others just give up and quit altogether. 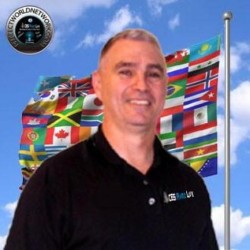 Jim Gillhouse
Jim Gillhouse has been involved in the network marketing industry since 1997. Jim first joined the Network Marketing Industry approximately a year before he retired from a twenty plus year career in the US Army.

Jim was fortunate to have experienced both huge success and devastating loss within the first few years that he was involved in the network marketing industry. As a result of Jim's experience from initial success followed by devastation caused when one of his key leaders decided to change companies and then with the financial aid of leaders at the new company rape Jim's organization. After being raided by the other company and a former friend Jim was forced to rebuild his team from scratch and through it all he learned that Success is Rarely Final and almost all Setbacks are Only Temporary.

Jim's first career began as a private (E-1) Aircraft Mechanic and Crew Chief in the US Army. A career he retired from as a Chief Warrant Officer Four (CW4) Standardization Instructor Pilot and Instrument Flight Examiner after twenty plus years. During Jim's career in the Army he learned a great deal about Leadership, what motivates people and understanding the psychology needed to teach and train soldiers. Even after all of the education and experience which Jim received from his military training, he will be the first to tell you that he has learned more about leadership, psychology and what motivates people since he has been involved in the network marketing industry than he did during all of his formal education and military experience combined.

The most important lesson Jim has learned from being involved in the industry of network marketing over the years is that this is an all volunteer industry and that our people are our most valuable resource. Consequently, the name of this industry should really be "Relationship Marketing."

Jim has often said: "I believe that there are only a few different kinds of people in the world."

1. Those people that naturally share their good and more often bad experiences with the people that they know... for free.
2. And those of us who enjoy a residual income for doing the exact same thing as the people above.

Since 1997 Jim has made it his personal mission to reach out to and train anyone that is willing to come along with him on this journey we call; Rejection, Insanity, Frustration, Disappointment, Joy, Excitement, Beauty, Thrill, Triumph, Wonder and Success. Jim believes that the industry of Network Marketing is indeed all of those things to almost everyone who ever chooses to get involved in our great industry. The fact that Jim has been and continues to be willing to share his knowledge and teaching with anyone regardless of whether they are on his team or not is a testament to who Jim is as a mentor and the kind of man he really is.

We have listed some of the reasons below that we have invited Jim to join our list of renowned contributing authors.

1. In 2007 Jim was one of the fifty-two contributing authors of John Milton Fogg's newest book titled "It's Time... for Network Marketing" right along side of Robert Kiyosaki, Bob Burg, Nicki Keohohou, Paul Zane Pilzer, Bob Proctor, Tom "Big Al" Shreiter, Bo Short, Ty Tribble, Jackie Ulmer, Dr. Dennis Waitley and Mark Yarnell
2. He has been a regularly featured guest of the Home Based Business Radio Show and Networking with the Blind Guy
3. Since January of 2008 Jim has been hosting his own Radio Show - ACES Radio Live. His radio show currently has listeners in over 90 countries around the world.
4. In 2010 Jim was nominated as one of the Top 25 most influential people within the Network Marketing Industry by the MLMIA.