This BUSINESS of LEADERSHIP: The Profit and Power in Attracting (or Creating) a Leader by Michael York

I wish for you THE COURAGE TO CHANGE! And to Achieve YOUR HEROIC DREAMS! What’s the LIFETIME VALUE OF A SINGLE LEADER? Leaders are rare. Leaders do take risks. Leaders don’t take shortcuts. Leadership is mostly about CHANGING PEOPLE’S BEHAVIOR. That means YOU GO FIRST! Not just everyone is a LEADER but almost anyone could BECOME one. Or ATTRACT ONE. Even those you might least expect. This business you’re in has created some of the most amazing success stories, financially and otherwise. Here is a business that doesn’t care if you’re a stay-at-home-mom who never had a job or went to college. This business doesn’t care where you live, where you were born, or what’s on your resume. Who you are NOW matters little…

You can STILL become a LEADER by many standards if only you’re willing.

NULL Leaders are valuable, even necessary to any cause, company, or organization. Leaders can be created or can be attracted. What if you could partner up with someone who was MORE SUCCESSFUL THAN YOU? Has MORE CONTACTS THAN YOU? Even MAKES MORE MONEY THAN YOU? What “value proposition” could you possibly offer (outside of this industry) that would ATTRACT POWERFUL LEADERS to partner with little ol’ YOU? Welcome to THE FUTURE. This is where more LEADERS will be attracted, created and hugely compensated than almost ANY OTHER PROFESSION over the next decade. Sure, that’s just my opinion. But I’ve got lots of evidence to back it up. More millionaires are being created in this industry than ever before. Where’s another great career track that’s cranking out MILLION DOLLAR EARNERS like an assembly line? Can you think of one? And not JUST millionaires, but masses of people who will change not just THEIR own lives, but the lives of so many others in the process through personal development, people skills, financial freedom, quality-of-life, etc.

And even if you don’t know any LEADERS now, if you have the right OPPORTUNITY all you have to do is keep on SOWING SEEDS. Keep talking to people. Keep working ON YOU! Anyone really could lead you to someone who might change everything for your business. And change their life in the process. That’s the POWER of this business of NETWORK MARKETING. I have a friend in the business who says his MINDSET is to simply find ONE LEADER A YEAR. Think about that. Searching and sorting for an entire year and you find ONE LEADER as a result. UREKA! Successful year? He thinks so and before you disagree, just by doing that 4 or 6 or 8 years…finding/coaching/attracting a SINGLE LEADER, he achieved his company’s highest position (earning multiple six figures a MONTH RESIDUALLY). Show me that in the corporate compensation handbook. Think a corporate recruiter would be breaking out the champagne over finding ONE LEADER a year? But here’s the rest of the story. The BIG PROBLEM for most individuals… It requires TIME. I was just with a hundred or so of these leaders in Hawaii and heard so many stories of attracting and growing leaders. One of the great quotes I took from that week was,

“Most people are TOO IMPATIENT to BECOME GREAT.”

Greatness takes TIME. It means STAYING in the game and SORTING through lots of people. You can’t talk to 3 people a year and expect to find a leader. You’ve gotta’ sow more seed than that for a huge harvest or even a single leader to show up in your business. So, three questions for you to consider:

First, you have to begin by working on YOU. Not so much that you have to BE A LEADER, but you must BEGIN THE PROCESS of BECOMING a Leader. Pay attention! Read about them, study them, seek out clues, common-denominators and how diverse and unique many of them are. Simply by doing this you will have begun the process both IN YOU and FOR YOU. You’ll better understand LEADERS. Leaders are READERS. Leaders MODEL Leadership BEHAVIOR Leaders Bring ENERGY Leaders know the VALUE of PRINCIPLES, like the PRINCIPLE of THE MASTERMIND… Who INFLUENCES how YOU THINK? “Men take on the nature and habits and power of thought of those with whom they associate most closely…”

“Poverty and Riches OFTEN CHANGE PLACES. When riches take the place of poverty, the change is usually brought about through well-conceived and carefully executed plans. Poverty needs no plan…Riches must be attracted.” —Napoleon Hill, Think and Grow Rich

Did you get that CLUE? Poverty NEEDS NO PLAN so most people arrive there and wonder why, that’s the PAY ATTENTION part. It’s not so much about your ABILITY as it is your AVAILABILITY, or your COACHABILITY.

Leadership says you must develop a greater MENTAL CAPACITY to think powerfully when most will give in to the “negative is normal” culture around them daily.

For TRUE LEADERS, it isn’t that WINNING is EVERYTHING, but in WINNING it is the WILL TO WIN that becomes the MAIN THING!

Leaders aren’t so much focused on becoming THE BEST as they are on becoming THEIR BEST. If this all sounds like one big cliché that’s one of the big problems today, Leadership has become this THING that makes many people tune out or roll their eyes and say “Oh yeah, I’ve heard all that already.” But this is a marketplace that cries out for REAL LEADERS and is willing to pay them accordingly, especially in the area of Network Marketing. Congratulations on being here to consider the possibilities of YOU (yes YOU) becoming a LEADER. The MOST EXPENSIVE thing in this marketplace is IGNORANCE! The MOST PROFITABLE thing is the IMPLEMENTATION OF A NEW IDEA! Putting yourself in a place where you are available and accessible to a NEW MILLIONAIRE MINDSET…and then CHOOSING a coach or mentor or mastermind to help you IMPLEMENT those ideas. Finally, in the words of one of the great leaders of my lifetime, Ronald Reagan,

I wish for you THE COURAGE TO CHANGE! And to Achieve YOUR HEROIC DREAMS! For that is exactly what LEADERS DO. To Your Uncommon Success, Michael 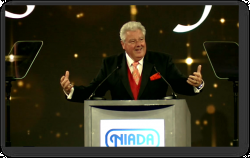 **EDITORS’ NOTE: Michael’s book The 10 Commitments is available at www.MichaelYork.com Or contact him directly at Leader@MichaelYork.com